This site is in permanent work. It will take infinite time until I put what I intend on it.
Please be patient. In the meantime you can consult Wiki on interferometry at
http://starryridge.com/mediawiki-1.9.1/index.php?title=Main_Page
Vladimir

Bath Phase Shift  Interferometer  (BPSI) requires several polarizing components. Two of them are linear polarizers, one is circular poarizer  aka quarter wave plate (QWP)  or retarder, and one is polarizing cube beam splitter.  All optics in the interferometer must be very clean, free from scratches, in order to introduce least amount of wavefront deformations. Most used polarizing  filters are plastic films and their surface is not particularly good or resistant to scratches. One source of good polarizing filters are filters for photographic cameras. They are made of polarizing films sandwiched between two glass plates. That makes them well protected and easy for cleaning. Used or even new  filters of this kind can be obtained cheep and are recommended for amateur use.  Polarizing filters for camera objectives come in holders  which are screwed to the objective  and can be rotated which makes them particularly suitable for PSI Bath. Polarizing filters for cameras  come in two varieties. Old style (film) cameras use linearly polarized filters, while digital cameras use circularly polarizing filters which are made from linear polarizer and quarter wave plate sandwiched between glass plates.

This is ray tracing of the Bath interferometer consisting of 10 mm beam splitter cube , a flat front surface mirror and  diverging lens of 10 mm focal length, 7 mm diameter and  1.5 index of refraction,  as used in testing the 850 mm ROC  spherical mirror. Laser beam width is 2 mm.The interferograms associated with each interferometer-mirror setting are synthesized as a Young two point source interference pattern corresponding to the actual position of final foci of the test and reference beams as seen on the each image text. In rendering images, refraction on the beam splitter cube sides was not considered.  refraction in lens and reflections on the splitter diagonal was used in ray tracing of the light beams . Real case differs because the conics, other than spheres, usually paraboloids, have spherical aberration when tested from ROC which modifies  the interference pattern.

Quantitative values of change of  the mirror positions, relative to the interferometer and resulting change in interferograms are instructive to get feeling for the amount of adjustments required in xyz translational stages on which the interferometer usually rests. It also demonstrates that adjustments can be divided so that for example longitudinal movement (z- axis) is done on interferometer and transverse (x,y axes) by the moving the mirror under test (or some other combination). Please note the difference in sensitivity to transverse movement compared to  the longitudinal.

The interferogram analysis program OpenFringe (from David Rowe and Dale Eason) is offering  several methods.  Most recent (status April, 2015.) is Fourier transform based, which works best on large number of not much curved and not closed fringes (because in this case separation of fringes from noise is efficient) , like in image 7. More on this in Wiki:

I will here describe variation of this method as I am using it with PSI-Bath
interferometer (Phase Shifting Interferometry). I have already posted first results on two small mirrors
one of 83 mm diameter f/5,  1:3.3 thickness to diameter ratio,  and another
one  115 mm diameter f/4.5, 1:6.2 ratio.
The mirrors are small  and thick and tested with optical axis vertical so not
much stand deformation was expected.
In the meantime  another mirror was obtained, 200 mm, f/4,  1: 8 ratio and
the method was tested on this one.
Mirror was resting on Plop designed 6 point cell. 4 rotations were used.
0, 45, 90 and 135 degrees (approximately, exact values are not required
by the method). Since angular part of astigmatism polynomials  is sin(2 theta)
and cos( 2 theta),  mirror astigmatism from rotations was oriented 0, 90, 180 and 270 degrees.
For each rotation 10 interferograms phase shifted by 72  degrees, were made.
By using Stephen’s running method and Michael’s 5 phase cycle PSI analysis
program, it was possible to make 6 cycles from 10 shifted interferograms. interferograms 1 to 5, 2 to 6, 3 to 7, 4 to 8, 5 to 9 and 6 to 10
So I have 6 results for each rotation (24 in total).

Analysis program provided Z4 (x-ast) and Z5 (y-ast) components which were
plotted y-ast  versus x-ast . Resulting plot is here, and in my Photos folder of
Interferometry group.
Photos, Vladimir Galogaza.

How did you determine this uncertainty of +- .003 waves?

Michael Peck told me that modified rotation method can also determine higher
order astigmatism . I have tried it with previous measurements and quality of
data was low enough to spoil such determination.
With my latest measurements, secondary astigmatism determination could
be estimated while  tertiary failed,  as demonstrated in the following three graphs.
(If the graphs are stripped in archives they can be found in my Photos album
Interferometry@yahoogroups.). This is one more demonstration of the superiority of the PSI-Bath (Phase Shift Bath Interferometry)  data quality (IMO). 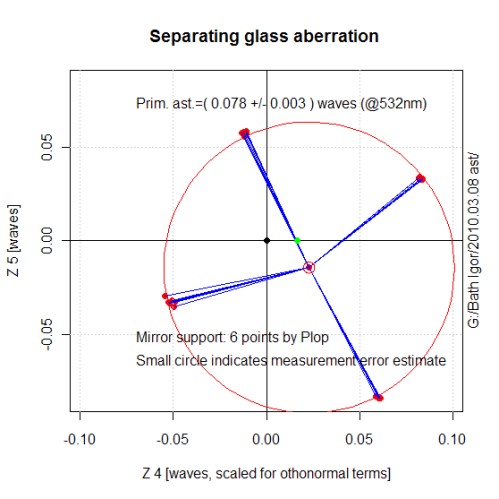 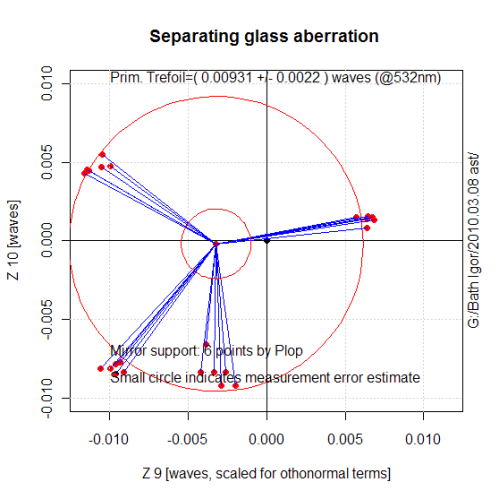 Michael Peck upgraded his PSI analysis programs with option for elimination of instrumental aberrations like stand induced astigmatism, trefoil and higher. Mirror rotation angles should be known and used as input data together with interferograms and maximum order of aberrations to be handled. 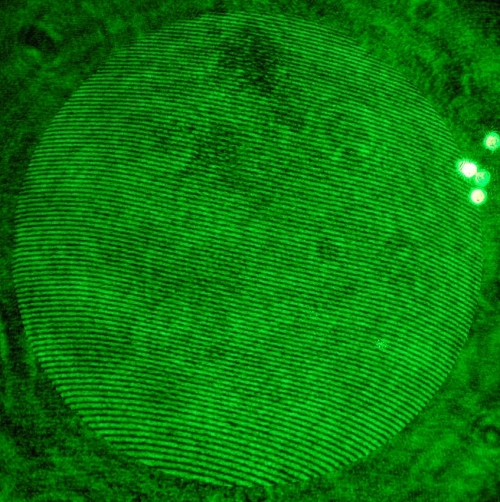 Interferogram with this interferometer

Interferogram with this interferometer 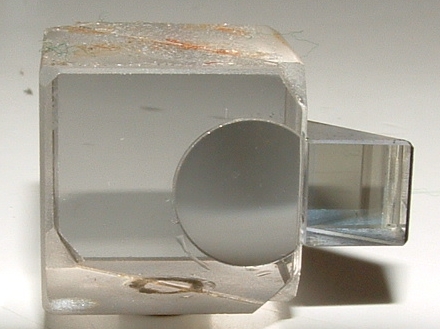 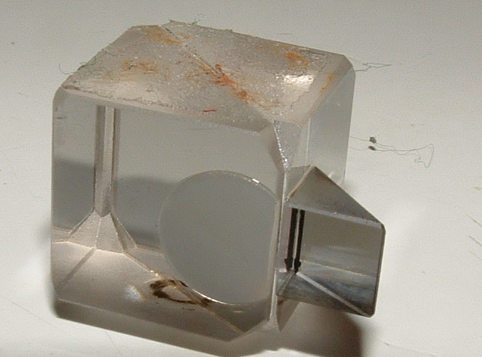 Bath interferometer is very small. To further reduce its size to essentials, I have eliminated holders for lens and folding flat by gluing them to the beam splitter cube. Cube is 15 mm on side, the diverging lens is plano convex, 9 mm diameter (cut on one side to enable smaller beam separation), 21mm focal length. Folding flat is right angle prism, 6mm.Laser for the interferograms was green diode laser pointer. Interferogram pictures are from hand-held  DSLR camera (exposition 1/800 sec). Beam separation for this unit was 6 mm. Lens and prism were glued to the cube with Norland Optical Adhesive 60, hardened with UV light.

Intensity of the green diode laser can be changed by variable serial resistor in power supply. The graph shows dependence of laser intensity on serial resistance. This laser has power stabilization cirsuit which has not prevented intensity controll . Power stabilization action is visible when input voltage is close to nominal value (3 V for this usnit) by leveling off  the curve for small resistance.

Intensity profile of the filtered beam

Intensity distribution along a center of an unfiltered beam

Unfiltered diode laser pointer beam spread by a lens, captured on the screen